While we were California, Gov. Jerry Brown signed into law a bill that makes illegal the words “husband & wife” in referring to marriage partners.  Those words will be replaced with the gender neutral word “spouse” in order to accommodate those who enter into an alternative lifestyle or “same-sex marriage.” Maybe it’s just me, but “I now pronounce you spouse and spouse,” doesn't have the same ring to it.  Will the terms “male & female “or “man & woman” be the next words to be deleted and termed politically incorrect? Why should thousands of years of terminology be thrown away to accommodate less than 2% of the population?  Let them come up with new words to describe the two partners in their relationships and leave the rest of us to be a husband or wife if we so choose. You say that’s just California, but whatever originates there soon makes its way over the rest of the country. There are times that I feel like I am living on an alternative planet and am an endangered species.

One thing I always enjoy doing whenever I visit a new city is to check out the types of places of worship.  As we rode on the upper level of a tour bus in San Francisco I saw many mosques and temples, but very few churches in that area. A large banner on one prominent structure announced its name as HerChurch.org. That aroused my curiosity and I had to learn more. This group brands itself as “A Liturgy of the Feminine.” According to their beliefs, the traditional maleness of God and Jesus as revealed in the Bible, is outdated and insulting to women. Instead of worshiping the God of the Universe, Her Church members worship the goddess that lies within the individual. I copied the following mission statement from their website. The misspelling is theirs.

“The liturgy, community and ministry of the congregation reflects diverse thealogical works and voices hoping to be a part of the prophetic voice of the divine feminine that will deconstruct Christianity and other patriarchal religions so that both a new paradigm and worldview may emerge that truly creates egalitarian just society and eco-sensitivities that tend to mending the web of life. “

The goddess movement celebrates and worships the pantheon of female deities found in all world religions, including Wiccan deities, the pagan Old Testament goddess, Asherah, and the Egyptian goddess, Isis.This “church” claims to be claims to bean offshoot of the Evangelical Lutheran Church in America.  I can imagine Martin Luther is rolling over in his grave.

It is not my job to sit in judgment of those who choose a different lifestyle or belief system. It is my challenge to love those with whom I disagree, speak the truth in love, and pray for the work of God’s Spirit in each of our lives. It is easier for me to live in my own comfortable world than to venture out of my comfort zone and see the world as it really is. Open eyes will help me pray more effectively and be a better witness to those around me. 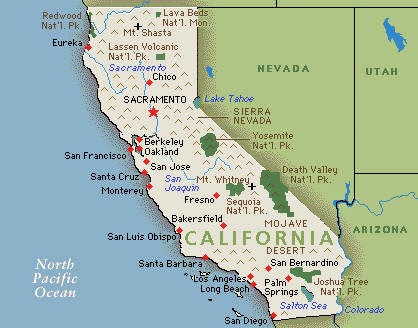 Californians and others often refer to their beloved state as “Shake, Bake, & Burn.” We didn't feel any earthquakes during our recent two week visit, but a flurry of small earthquakes rumbling near the Mammoth Mountain Volcano was categorized by the Geological Survey as volcanic unrest.  However, we couldn't ignore the evidences of a long-standing drought and the resulting wildfires in every corner of the state.  Everything was brown-grass, hillsides, and trees-that were already shedding their brown leaves.  Because water for irrigation is in such short supply, the only green we saw was in the Sacramento Valley where fields of fruit trees and vegetables were abundant.  We visited a local farmer’s market and took delight at the colorful display of produce grown by small farmers who struggle to stay afloat.  I wanted to take all the veggies home and cook up a big pot of vegetable soup. Since I couldn't do that very well in a hotel room, the soup was put on the back burner-so to speak.

We visited Sacramento, the state capitol, Sutter’s Fort, and the spot where gold was discovered. Sutter’s Fort depicted the life of the early settlers that came to California while it was still a part of Mexico. It was in a creek on Sutter’s property that gold nuggets were found. The gold rush literally transformed California overnight and it wasn't long before the former Mexican territory became the 31st state in 1850. We kicked up lots of dust during our visit to Sutter’s property, but none of it was gold.

The sunny blue skies of Sacramento were marred by white billowing clouds of smoke from a massive wildfire close to the California-Nevada border. The tinder dry conditions and no rain since April make it hard to stop a fire once it starts.  I remember the drought conditions we had in Georgia three years back, and this is so much worse. The fire was far away, and we were not in any danger, but I thought about the people who live in the fire zone who were losing their homes and businesses. In the future, I will be more appreciative of Georgia’s humidity and abundant rain.

We were glad it didn't rain when we took our bus tour through San Francisco since we were on the top deck of a double-decker. The highlight of the tour was crossing the Golden Gate Bridge and visiting Sausalito.  We enjoyed a delightful lunch and visiting the local shops before heading back over the GGB and stopping for a great photo op of the San Francisco skyline, Alcatraz, and Angel Islands.

We finished our trip in the Silicon Valley where Charles was involved in a wind tunnel test of his drag reduction devices. His successful test means there will be a flight test next summer back at Edwards Air Force Base in the California Desert.  More Shake, Bake, and Burn is on the horizon.  We pray for strong minds and bodies and the ability to meet whatever challenges lie ahead.
Posted by Frieda Dixon at 1:36 PM 2 comments: