Did you go to church Sunday?  Did you take time to pray today? The freedom to engage in those two activities is often taken for granted. But for those believers in China and Russia, it’s really risky behavior. Recent newspaper and magazine articles tell of religious crackdowns in these two Communist countries that are as severe as in the days of Stalin and Mao.

According to the Christian Post newspaper in a July 16 article by Stoyan Zaimov, Chinese students in the Guizan Province are being told to stop going to church or be banned from going to college. Parents are forbidden from taking their children to church or the students will not be allowed to take college entrance exams or be admitted to the military. The excuse is that children under 18 should not be subjected to brainwashing.

In other areas of China, churches are ordered to remove outside crosses or they are torn down by authorities. House churches are under strict scrutiny and forced to turn over all tithes and offerings to the government. Church pastors and members who protest this unfair treatment are subject to arrest.

A new law went into effect in Russia on July 20, 2016 that prohibits evangelizing outside of a recognized and government authorized church. Severe limits have been placed on preaching and teaching the Gospel. This includes activities in homes and online. This report written in Christianity Today by Kate Shellnutt explains that Russian nationalistic identity is tied to the Russian Orthodox Church and that those outside the established church who engage in missionary work will be severely punished.

For ten years my daughter-in-law’s parents, Charles & Phyllis Hardie, served as missionaries in Novosibirsk, Russia. They entered Russia after the collapse of the Soviet Union. That window of opportunity allowed them to preach and spread the Gospel to many who might never have heard.  They encountered all kinds of opposition from the Russian Orthodox Church. Now that the doors are closing again to evangelical Christianity, I pray that the seeds they planted will continue to grow and flourish.

Why are totalitarian regimes threatened by Christianity?  I can think of several reasons. 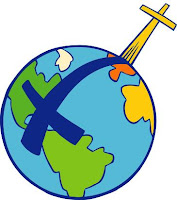 Many Bible verses talk about Christian persecution and how Christians are to bear up in times of distress.  1 Peter 3:16 “Keep a clear conscience, so that those who speak maliciously against your good behavior in Christ may be ashamed of their slander.”

Theologian William Barclay said “Endurance is not just the ability to bear a hard thing, but to turn it into glory.”

Pray for Christians who are being persecuted in Russia and China and for those whose lives are in danger at the hands of ISIS and other evil groups. And be willing to take a stand against those who would place limitations upon the spread of the Gospel here in America.
Posted by Frieda Dixon at 4:31 PM 2 comments:

Happy 75th birthday to United Service Organizations—better known as the USO. President Roosevelt encouraged the creation of this private entity at the beginning of World War II in 1941. The stated purpose was to support our troops overseas by building clubs that would provide a “home away from home.” The USO clubs provided dances and social activities, as well as a quiet place to write a letter or read.  It later became well known for its sponsorship of celebrity entertainment to raise the morale of the soldiers, sailors, and pilots serving deployed to distant battlefields.

Many of us remember Bob Hope and other celebrities who brought cheer and encouragement to the troops fighting in Vietnam. Today contingents of USO volunteers are on hand at the top of the airport escalator to cheer men and women in uniform returning to the home front at the end of their tour of duty. This organization provides a valuable service and a helping hand to those who are sacrificing to meet the military obligations of our country. Private donations and volunteers are vital to the success of the USO.


Today I want to share a touching story from guest blogger, Rosanne Douglas, about how she and her husband provided a lifeline to another of God’s creation.  Rosanne is a member of my Christian Authors Guild. She writes a variety of styles including inspirational and human interest stories. She has also written Bible studies as well as poetry. Welcome Rosanne.

“It was one of those, ‘but does God-really-care-what-you’re-going-through kind of day!’  A walk would do us good we thought as we stepped from our cozy cabin into the sunshine. This trek would take us where the creek frames the gravel road and honeysuckle winds its way up the roadside bushes. And mountain laurel was soon to display her breath-taking white bridal gown boasting of her southern beauty and sweet savor! My husband and I lived off a trail at the foot of the Smokey Mountains and daily enjoyed God’s stunning creation. Stopping along the creek waterfront, I breathed in the fragrance and felt God’s presence entangled with my own. I needed this. The season had been a spiritually tough one.

From the corner of my eye, I locked in to the distress signals of a black bug scooting about on the top of a rocky mound—a tiny island surrounded by tumbling water but scaled to his size!  With no fly gear attached the bug seemed imprisoned and desperate. When his first pair of feet touched the stream, he quickly backed away. That would not work!  Several minutes went by.  Circumstances got him there, but now he was in scramble mode—vulnerable but determined.
We decided to throw him a lifeline?  We did it by forging the stream with a stick which enabled him to cross over. He was now a happy little bugger as he scampered into the woods. 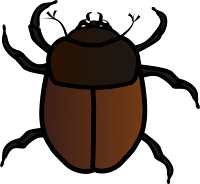 How often do we find ourselves in that same predicament with no way out, hopeless, crying for help?  The Lord reminded me that He is there to attend to our every need in life, no matter how big or how tiny.  If important to us, is important to Him.  He always plans a way of escape.
Isa. 30:21; Jer. 6;16; 1 Cor.10:13

This little black bug gave us a mighty lesson in diligence and trust in God’s faithfulness— a lesson learned from one of the most unlikely of God’s creatures. “