My Visit to The Big Dipper

It’s hard to clearly see the night sky in the suburbs of metro Atlanta. The view is dulled by the proliferation of lights that define our modern era. Charles and I often go outside to get a glimpse of the moon and the stars, but come away disappointed by the lack of darkness. It makes him long for the wide open skies of the West and other underpopulated areas.

Much to my surprise, I got to view the Big Dipper almost “up close and personal.” At least it seemed that way. We left for France just as the sun was setting in Atlanta and didn’t see daylight until we landed in Paris 8.5 hours later.  After our tasteless dinner on the plane, we attempted to settle down for a long sleep so we would be alert in the a.m.  We put on our eye masks and ear plugs and tried to dose off.  I was in the window seat and couldn’t get comfortable no matter how hard I tried. Charles, as usual, was out like a light.

I knew the plane was flying the Great Circle Route along the northeastern seacoast before turning East over the Atlantic to Europe. After about four hours of flying, I lifted my window shade hoping to see the lights of Nova Scotia or Greenland far down below. Much to my amazement, the bent handle and bowl of the Big Dipper was on display right outside my window. It seemed close enough to touch. I watched the celestial show for over an hour until our plane changed course.

For me, flying is a spiritual experience. I feel like I am seeing the world with all its busyness from God’s point of view. The many activities of billions of people seem so insignificant, and yet God loves each and every person so much that he sent his only son, Jesus Christ, to die for all of us. As I look out into space, I’m awestruck by the vastness and perfection of God’s creation. King David reflected on the heavens in his writings:

Psalm 19:1 “The heavens declare the glory of God,
and the sky above proclaims his handiwork.”

My visit to the Big Dipper ignited my curiosity about the famous constellation. I discovered that the seven stars that make up the handle and bowl are an asterism or cluster of stars inside the constellation Ursa Major or the Great Celestial Bear.

For centuries the Big Dipper has been used as a navigation tool and pointer to Polaris, the North Star. “The Big Dipper was an important part of the Underground Railroad during the Civil War. Slaves escaping from the South were told to "follow the Drinking Gourd" to the North.” (Space.com)

According to Bruce McClure of the EarthSky website, “The starry sky serves as a calendar and a story book, as is beautifully illustrated by the Mi’kmaw tale of Celestial Bear. In autumn, the hunters finally catch up with the Bear, and it’s said that the blood from the Bear colors the autumn landscape. In another version of the story, Celestial Bear hits its nose when coming down to Earth, with its bloody nose giving color to autumn leaves. When Celestial Bear {and the Big Dipper} is seen right on the northern horizon on late fall and early winter evenings, it’s a sure sign that the hibernation season is upon us.” 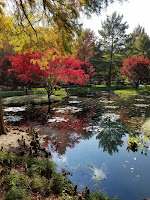 Fall has arrived in Georgia with all its glorious colors. Now that I am earthbound, I can look at the beautiful fall trees and remember my visit to the Big Dipper.

Posted by Frieda Dixon at 2:13 PM No comments: