What a legacy. What a life. Billy Graham–the evangelist to presidents, kings, and ordinary people like me–died this morning after a long illness. At a time when our nation desperately needs spiritual leadership, his passing leaves a void.

I had the opportunity to attend and work in two of his crusades—Birmingham, AL in the 1960s and Atlanta, GA in the 1980s.  I trained to be a counselor to those who came forward and was able to pray with some.  Our church also followed up with those in our community who asked to receive Christ.

This past weekend I attended a writers’ conference at the Billy Graham Training Center at the Cove.  The Asheville Christian Writers’ Conference was a wonderful opportunity for fellowship with other Christian writers. Together we learned better writing techniques from the best in the industry.  I came home refreshed and renewed from that special weekend.

I took a break from classes to visit the Ruth Graham bookstore on the lower level of the conference center.  Displays of memorabilia from the Graham’s world travels lined the halls leading to the bookstore.  As I looked at the gifts from world leaders, I wondered if Billy Graham would live to see his 100 birthday.  It would have been a great birthday celebration next November, but nothing like the heavenly welcome he is experiencing today. Not only is he seeing Jesus face to face, but he is reunited with his beloved Ruth, his wife for 63 years.

Few of us will have the same opportunity to witness to millions, but God has a task for us right where we are.  May we be equally faithful to our calling.

This verse spoken by Jesus found in Matthew 25:23 sums up the life of Billy Graham.

"His master replied, 'Well done, good and faithful servant! You have been faithful with a few things; I will put you in charge of many things. Come and share your master's happiness!' (NIV) 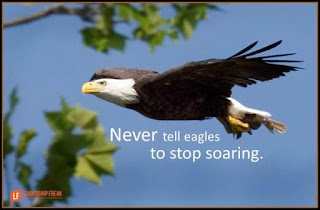 The trees that stood tall beside an Alaska river made great perches for all kinds of birds, especially eagles. The beady-eyed creatures watched all of us tourists to be sure we weren’t a threat. We were spellbound when an eagle spread its wings and took flight. What a beautiful sight to see our American symbol cast its shadow on the water below as it soared into the sky. I had hoped when we took our Alaska trip to see these magnificent birds, and I was not disappointed.

When the Philadelphia Eagles played against the New England Patriots in the Super Bowl, I decided to root for the underdog Eagles. Professional football is not what I enjoy watching on Sundays, but made an exception for this big game. I’ve been especially turned off by the lack of respect for the Flag and National Anthem and oversexualized half time shows. But when I read stories about the camaraderie among many of the Eagles’ team members because of their shared Christian beliefs, I decided to watch the game.

Once again I was not disappointed.  A hard-fought game handed the Eagles a long-sought victory. The personal testimonies of the coach, quarterback, and others after the win gave glory to God and Jesus Christ for their abilities and the cohesiveness of the team. What inspiring words for a worldwide football audience.

During church last Sunday, our pastor, Jim Conrad, preached another inspiring message about eagles from the prophet Isaiah (40:28-31 NIV). 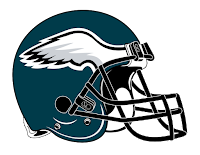 Have you not heard?
The Lord is the everlasting God,
the Creator of the ends of the earth.
He will not grow tired or weary,
and his understanding no one can fathom.
He gives strength to the weary
and increases the power of the weak.
Even youths grow tired and weary,
and young men stumble and fall;
but those who hope in the Lord
will renew their strength.
They will soar on wings like eagles;
they will run and not grow weary,
they will walk and not be faint.”

The message he delivered said that when we hope in the Lord, he provides great benefits for every situation in life. When we are in a tough time, God will walk with us through it.  He will also help us run the race of everyday life, and at other times help our faith soar like an eagle. In other words—He will never disappoint.

This is Charles’ favorite verse in the Bible and his life’s inspiration.  We are using this verse on the first page of his memoir, Chasing the Whirlwind.  It sets the tone for his story of overcoming life’s challenges and making a difference in the aviation industry. Stay tuned.
Posted by Frieda Dixon at 3:24 PM 2 comments: