These sensational headlines were posted online this past week. A nice change from all the political controversy about our “Really Big” election just two weeks away!  Here are the interesting details.

Savannasaurus is the name given to the skeletal bones of this monstrous plant eater that measured one-half the length of a basketball court. It is speculated that this creature lived 95 million years ago and migrated from South America before the continental drift separated Australia from the prehistoric land mass.

The mastodon unearthed in Michigan was an extinct relative of the elephant. Around 65% of the skeleton was found in the State’s thumb region on a stream bank.  Researchers will carbon date the bones and try to determine if humans intervened in the animal’s death.  I’m reminded of that proverbial bit of wisdom. “How do you eat an elephant?”  Answer – “One bite at a time.”

Myrtle Beach, South Carolina made news when a lucky tourist strolling through the waves found a giant shark tooth measuring five inches long.  Officials determined the tooth was from Megalodon, a 60 foot shark that became extinct 2.6 million years ago.  It appears that Jaws wasn’t so scary after all.

These ancient skeletal remains make the human skeletons on display during this Halloween week look pretty pitiful. They remind me of the insignificance of man compared to the magnitude of God’s creation. Will people in the distant future, be digging through our civilization, trying to determine why we no longer exist?

What could be unearthed—the foundations of once magnificent skyscrapers; portions of tumbled down bronze statues that proclaimed freedom; rusted girders from bridge spans that crossed mighty rivers; granite remains of famous presidents fallen from mountains and monuments.

In the Bible, God set the prophet Ezekiel down in a desolate valley of the dry bones and asked him, “Son of man. Can these bones live?” Ezekiel 37:3

The Good News is that God wasn’t done with Israel in Ezekiel’s day, and I don’t believe He is done with us today, if we will follow His ways. 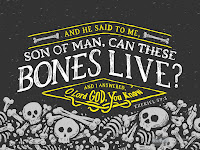 Escape to the Mountains


Every October like a siren call, the small cities and towns of North Georgia beckon me to explore their beauty and bounty. It doesn’t take much convincing for me to escape the traffic and congestion of metro Atlanta and head north to see the changing leaves and breathe the refreshing air of Fall.


In late September, I visited the rolling hills of Rome, Georgia and the Chick-Fil-A WinShape Conference Center in the Appalachian Piedmont. The conference center on the campus of Berry College is located on the former dairy farm of the college. The dairy was constructed in the early 1900’s to teach farming skills to the isolated students of the region.  Each barn was built to resemble the architecture of the French countryside. Careful restoration converted the brick and tile dairy barns into meeting places and hotel-type accommodations. I was raised in cow country in Northern New York, but I wasn’t brought up in a barn nor did I ever spend the night in one. But I finally got to do just that and what a delight it was.

The purpose for our visit was to attend a writer’s workshop that focused on writing narrative non-fiction. Both Charles and I received great instruction and ideas for enriching his life story, Chasing a Whirlwind.  We came home with enthusiasm ready to tackle the rest of his book. The beauty and serenity of that place will stick with us for months to come.

On my next venture into the mountains I headed with my friend, Libby, to the foothills of the Smoky Mountains and the quaint town of Blue Ridge, Georgia. We ate a delicious lunch before checking out all the gift and boutique shops lining Main Street.  Stores with their colorful fall—and Christmas—decorations were a reminder that the holidays are just around the corner.  We visited a roadside produce stand and were amazed at the beautiful displays of pumpkins, gourds, and flowers.  I never knew pumpkins came in so many shapes, colors, and varieties. 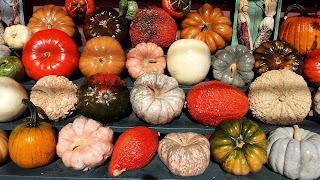 We couldn’t resist stopping at the Panorama Farm Market in Ellijay before hitting the Interstate and heading home. A cold drink of complimentary apple cider and a sample of a variety of fresh apples and deserts was a perfect way to end our day at the “Apple Capital of Georgia.”

The Psalmist best expressed the spiritual refreshment that comes from a visit to the mountains.

“I will lift up mine eyes unto the hills, from whence cometh my help. My help cometh from the LORD, which made heaven and earth.”  Psalm 121:1-2 (KJV)

I hope that each of you will experience a mountain moment during this beautiful season of the year.