Our brothers and sisters are there with us from the dawn of
our personal stories to the inevitable dusk.” – Susan Scarf Merrell

As the years go by and life gets busy, we don’t spend enough time with family members who live away. It takes extra effort to plan opportunities to get together especially since we’re all getting older and challenged by our abilities to drive long distances. Charles and I had been saying for some time we needed to see both our sisters this spring.

Charles sister, Marion and her husband Richard Simmons, live in Baton Rouge, LA which is a long ten hour drive from where we live. So we asked them to meet us in the picturesque city of Fairhope, AL for the weekend. The beautiful weather enabled us to tour the shops and visit the Mobile Bay area of town. We enjoyed tea at the Grand Hotel in Point Clear and a delicious feast at the rustic Wash House Restaurant. The building is so old; you can’t imagine a fine restaurant being housed inside. But the inside atmosphere and food were very delightful. We spent a lot of time catching up on kids and grand kids and talking about the old days when Charles and Marion were young—more interesting stories for Charles’ book.

We drove scenic 98E from Fairhope toward Pensacola, FL. Several signs along the way kept us entertained and gave me some new ideas for future writing efforts. I’m glad we’d already eaten lunch when we saw the Roadkill Café or we might have been tempted to check it out.  Next we passed the Blue Angel Baptist Church that gives dual recognition to the Christian’s eternal destination and the US Navy’s flying aerobatic squadron.

Our next destination was Gulf Breeze to visit with my sister and her family.

Audrey Kimmel is my older sister and like me a recipient of a liver transplant. Our personalities and interests are similar so we’ve enjoyed a lot in common throughout our lives. I was the pest when we were younger when she dated her soon-to-be husband George. Charles and I stayed on Pensacola Beach so we could take advantage of the beautiful weather and the ocean waves.  Audrey came with us to sit on beach chairs under a big umbrella—a very enjoyable and relaxing experience. We enjoyed visiting with their children and grandchildren, and having a delicious dinner with Audrey and George at Jackson’s in Pensacola on our final vacation night.

Sisters are those special people in our lives who have known us the longest, know all about us, and love us anyway. So glad we could make some new memories with them.

As we headed home on I-65 in Alabama near Evergreen, we drove over Murder Creek.  My story making wheels have been churning ever since.

What’s your favorite way to travel? I like all modes of transportation that will take me to new and interesting places. We were too poor to travel much when I was a kid, so it’s still a real treat for me to go anywhere. However, I’ll take a pass on boats and ships since I get seasick. 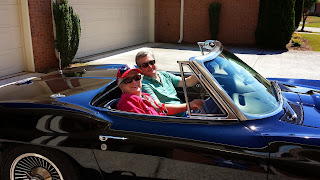 As a teenager I yearned to ride in a luxury convertible like I saw advertised on TV and in the slick magazine pages. I wanted to hit the road and feel the wind in my hair and the bugs in my teeth. When I found out that one of the engineers in our office had purchased a classic vintage 1966 black Corvette convertible, I started to drool and drop hints. “You know I was a teenager in the 60’s and I didn’t know anybody back then who had such a fancy car.” On another occasion I took a more direct approach “Riding in a Corvette convertible is on my bucket list.”

Finally, our co-worker Larry Hill said, “It’s going to be beautiful Saturday. Do you want to take a ride?” I looked at Charles with hopeful eyes as he said, “Go for it.”

We cruised through downtown Acworth with its antique shops and historic buildings. I waved at the gals at Glitzy Chicks and felt sixteen again. Finally we arrived at Sonic for car hop service—vintage 1966. A beautiful day, a beautiful car, and a smooth way to travel. 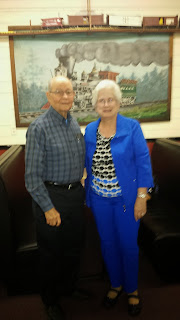 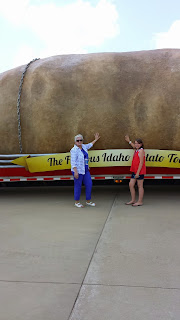 The next Saturday Charles and I went to the Salute to America Air Show at the Silver Comet Airport in Paulding County. Charles checked out the Corsair he worked on when he was in the Navy and admired the C-130 cargo plane on display. Charles’ Finlet invention was tested on a similar C-130 with good success. Now we are waiting for the government to decide to buy them. It’s a good thing we’re not holding our breath.

Have you seen the Famous Idaho Potato Truck?  Well, we found it at the air show and it did not have wings. Here’s granddaughter Alexa with me in front of the Giant Spud.

So where’s the train—at the Whistle Stop Café where we dined on fried chicken and biscuits. The train made famous by the movie, The Great Locomotive Chase, is housed nearby in Kennesaw, GA and is featured at the Café. A small scale version of the famous Civil War train travels through the restaurant on an overhead suspension track blowing its horn as it goes. That’s us standing in front of a painting of The General with the moving train in the background.

I didn’t go farther than thirty miles to enjoy planes, trains, and automobiles, but it was still quite a ride. Where are you going on your next road trip?