From her marriage to Prince Philip to her coronation as Queen in 1953, I watched the first woman since Queen Victoria ascend the royal throne in Britain.  Paper dolls were popular when I was eight years old, and with a set of her bridal party and coronation service paper dolls, I was a witness to history. It’s a shame they didn’t survive my childhood.

The grainy television and movie photos of both ceremonies were state of the art at the time and quite exciting to watch. I observed the colorful and beautiful live production of the whole funeral service—what a difference 70 years makes in the world of technology.

With King Charles III, Price William, and Prince George in line for the throne, Elizabeth II will be the last female monarch for years to come. Her incredible lifetime of service to God and her country was celebrated on Monday.

Yes, there have been scandals and troubles for the royal family along the way, but the Queen somehow seemed to rise above it all and restored dignity to the throne. Her Christian example will be a challenge to replicate by future monarchs.

Yesterday’s funeral was filled with pomp and circumstance, carried out with precision. The numbers of military officers who marched long distances and hoisted the very heavy coffin up the stairs to Westminster Abbey were amazing. 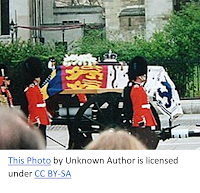 The poignant lowering of the casket after the graveside service at Windsor Castle chapel signaled the end of a life well lived. What a special moment indeed. It was a funeral for the ages planned many years in advance. Goodbye Queen Elizabeth—you were one special lady.